This was evident at a fascinating Curzon Q&A earlier this year in London. At the event he introduced Personal Shopper – his second project with Stewart following 2014’s Clouds of Sils Maria – by stating it was as much her film as his own. As more words of admiration followed it was clear both actor and director had benefited from their collaborations.

For Clouds of Sils Maria, Assayas gave Stewart a chance to act with a freedom that Hollywood studios, finely-oiled and profit-focused beasts, tend to discourage. After working alongside the majestic Juliette Binoche in Clouds, Stewart had both the grounding and confidence to deliver a wonderful solo performance in Personal Shopper.

Equally, Stewart’s humanity and vulnerability as an actress made her ideal for Assayas to embrace issues of artistic legitimacy and, later, the supernatural.

With the release of Personal Shopper on DVD and Blu Ray, it seems an ideal time to examine their collaborations in finer detail (through the use of selected images) and assess what we can learn from the mesmerising way Assayas photographs Stewart.

IN both films, Stewart’s characters – Valentine (Clouds of Sils Maria) and Maureen (Personal Shopper) are faced with feelings of isolation.

For Valentine, these emotions are rooted in her inability to connect with Maria (Binoche) on a creative level. The above image comes after Valentine – cutting a more frayed figure than earlier in the film – finds her thoughts shot down once again by her finicky boss.

This disconnect between the two is made clear with Valentine sitting tense and frustrated while Maria sleeps in the background. It is a fascinating image which underlines Maria’s obliviousness to her assistant’s state of mind.

Similar moments are placed by Assayas at points in the film to reinforce Valentine’s growing disillusionment – something we are left to ponder unlike Maria, who is wrapped up in her own  insecurities and stubborn outlook.

In Personal Shopper, Assayas makes Maureen’s isolation visible  in moments of transport. Most eye-catching are the shots of her drifting through the Parisian streets on her scooter. 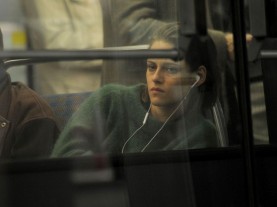 Assayas’ image of alienation in a blurry foreign city is brilliantly supported by Stewart’s acting which, even in these short moments, communicates her character’s troubling inner-turmoil.

CLOSE-UPS can be a powerful and illuminating cinematic tool.

We see this early on in Personal Shopper when the camera fixates on Maureen’s face as she tries on her boss’s boots.

The scene is subtly and enchantingly acted by Stewart, who shows a self-assurance that contrasts with her nervousness waiting for her twin brother Lewis to ‘arrive’ in the house. With forbidden boots on, she looks a transformed figure: is this what she craves to be?

Tellingly, it is a similar look  – one exuding seductiveness  and sensuality – we will see later when she tries on the sparkling dress.

The frame also reminds me us a close-up of Valentine at the start of Clouds of Sils Maria. Here, Stewart’s face takes up the frame giving a sense of honesty, relatability and closeness to the character.

The feelings provoked by this close-up are more significant given the distance Valentine is from Maria in this train scene. Perhaps Assayas is visually foregrounding Maria’s inaccessible nature to highlight the conflict with Valentine’s openness.

ONE fascinating visual aspect of Personal Shopper is Assayas’ use of mirrors and reflections.

Their presence certainly plays into the film’s investigation of our relationship with the invisible. As far back as the Romans, there have been ties made between the supernatural and mirrors (in cinema think of ominous horrors such as Clive Barker’s The Candyman and Mike Flanagan’s Oculus).

So the inclusion of mirrors could be part of the same probing by Assayas which also led him to feature the art work of Helmut Klimt.

As part of this link, reflections and the act of seeing ‘double’ are reminders that Maureen was once a twin. For Maureen there will always be a part of her missing with the loss of Lewis, a painful truth that keeps her in Paris and leads her on this turbulent inner-journey.

Assayas’ use of mirrors also works as a commentary on the fashion industry. In the captivating image below, Maureen daringly takes a photo of herself in her boss’s dress. The fashion industry, which Maureen is a part of as a personal shopper, is image-obsessed and in this frame we can see her being enticed by the empowerment and confidence this can bring.

Ultimately, mirrors and reflections have a revealing quality which Assayas captures strikingly. With them, we almost have a 360 view of Maureen with nothing unseen or hidden. Visually, Maureen’s true nature is on show as she begins to explore an untouched, devilish part of her inner-being.

In these frames, Personal Shopper’s themes of the supernatural, technology and image are melded together. It is the type of imagery that makes Assayas such an interesting and thoughtful director.

Not only that, but Assayas also has one of the finest performers in the world to populate his frame.

The Assayas and Stewart axis is one of beauty. Let us hope there is more to come. Cinema will be the better for it.

Personal Shopper is now available on DVD and Blu Ray. Click here to buy from Amazon.

Kristen Stewart: Back from the Twilight

View all posts by James Prestridge