DOLPHINS are often able to ward off shark attacks by swimming together in pods.

This theme of togetherness – or lack of it – is explored in Dolphins and Sharks, a play written by American playwright James Anthony Tyler and getting a welcome airing at the Finborough Theatre.

Set in a downmarket stationery store in New York’s Harlem where the photocopier seems to have a life of its own, it shows how a ruthless profit obsessed owner (Mr Timmons who we never see) can divide and rule. Pitting workers against each other as he relentlessly seeks to control his business’s costs, usually by scything down the lowest hanging fruit. Not an ounce of empathy is on display.

It is a play of our time, America’s time – an obvious retort to the rabid capitalism that thrives under President Trump and which currently divides Americans (although it is set in 2014 when President Obama resided in the White House). Workers with no or few rights in one corner and ruthless businesses in the other which are only interested in their bottom line. Profit under alles.

To emphasise the point, the play draws parallels with America’s dark past – slavery and chain gangs – although the link is a little tenuous and uncomfortable. Anyone who disagrees should read Colson Whitehead’s The Underground Railroad. A far more shocking read than anything Dolphins and Sharks throws at its audience. 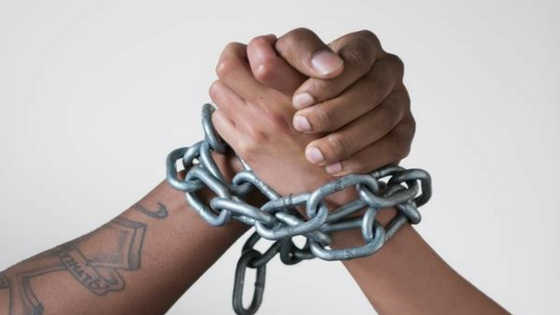 Mr Timmons’ enforcer is Xiomara Yepez (Rachel Handshaw), a petite and attractive Dominican who he promotes writing a capstone paper to manage the shop.  But the ripples this decision causes are seismic as Xiomara lets her new found power go to her head.

Suddenly, friendships forged at work are threatened as Xiomara (previously happy to borrow from the till and steal a little bit of stationery) gleefully carries out Mr Timmons’ dirty work.

Both the janitor Danilo Martinez (Hemeilio Miguel Aquino) – a fellow Dominican – and then long serving assistant Isabel Peters (the splendid Shyko Ammos) are targeted by Xiomara as she shakes things up.

Name badges are suddenly the name of the day as is clocking in and the requirement to send an email if there is a possibility that they are going to be late to work. Also, no more free photocopying for long standing customers such as Amenze Amen (indeed the only customer we ever see) who uses the shop’s computer to do research on dolphins for a biology class she is attending.

As for new employee Yusuf Nwachukwu (Ammar Duffus) who persuaded Xiomara to give him a job, he is refused the pay rate he was initially promised, even after he has finished his probationary period.

Xiomara uses this to her advantage in order to get Yusuf to gather evidence that will allow her to sack Isabel – even though it is student-debt riddled Yusuf who is the true villain.

Despite the emphasis on highlighting the rougher edges of capitalism, Dolphins and Sharks is not without its humour. For that we must thank a combination of Tyler’s wit and a peerless performance from Shyko Ammos. Padded up for the role, she is a Harlem motor mouth who is one moment self-deprecating (‘fat and black’), the next ranting and railing against everyone.

‘Jesus created the world in seven days so it will probably take her [Xiomara] seven months to lower the price of copies and seven years to get you that rise,’ she tells Yusuf. Isabel believes the good people of Harlem should not be paying 75 cents for photocopies.

It is Isabel’s sharp tongue and her ability to spit venom that saves us from a play that could sink in its own sanctimonious preachings.

The set is a credit to Anna Driftmier (set and costume designer),  containing more stationery that can be found in a typical Rymans store.

Standing together is the overriding message the audience is emphatically left with (thank you, Amenze).

I am sure Jeremy Corbyn would like the play as indeed would Len McCluskey. One for all and all for one. But for the performance of Shyko Ammos alone, theatre lovers should swim with Dolphins and Sharks.

Dolphins and Sharks plays until September 30

View all posts by jeffprestridge